You are here: Home /Blog /Breed Information /Boxer Dogs & All About Them…

Boxer Dogs & All About Them…

Boxer dogs are the perfect companion for any family or individual who leads an active lifestyle. They are an incredibly energetic, social, inquisitive and devoted breed. Their loyalty makes them excellent protectors and watch dogs.

Although Boxer dogs are social, loyal and loveable, they are also known to be particularly stubborn, especially when it comes to training. They also require a lot of exercise. Therefore, before you decide if a Boxer is right for your family, you need to do your homework.

Boxer dogs have been around since the 19th century, and were developed in Germany. The Boxer’s ancestors were believed to be a warrior breed of old fighting dogs known as Assyrian Molossian. The Molossian was a strong, courageous dog used in battles. This warrior breed eventually made its way to Europe and reached Germany in the 1700’s.

The breed quickly became popular in Germany, and was known as the Bullenbeisser. It was celebrated for its power and strong build. Hunters used the dog to hunt and hold down a bull, bear or a boar. However, during the 19th century the Bullenbeisser became more of a utility dog and less of a hunter. At this time it was used by shop owners and peasants to pull carts. In addition, these dogs even performed in the circus.

Boxer dogs were later developed when England brought their famous Bulldog breed over to Germany. The Bulldog and Bullenbeisser were bred together, and the resulting dogs are believed to be Boxers. The name Boxer was given to the dogs because the breed was known to paw at the ground when in play.

The modern Boxer that dog owners love today made their appearance in the late 19th century, and finally made their way to America in the early to mid 20th century. Ever since their debut in America, Boxer dogs became extremely popular in the United States, and remain one of the more popular dog breeds available today.

Boxer Dogs – What They’re All About

Boxer dogs are a humorous and intelligent breed that loves to please and be with their family. He is devoted and will want to be with you no matter where you may go.

Boxers are a medium sized dog that have a strong build and stand 25 inches at the shoulder, weighing 65 – 80 pounds on average. They are recognized as being part of the Working dog group.

Although the Boxer has a strong build and his heritage is linked to a warrior dog breed, essentially they are big dogs that act like energetic puppies. Therefore, you need to be ready for a dog that will love to jump up on people and furniture, and will chew through just about anything. Thus, you will need to provide your Boxer with proper obedience training, as this breed can be exceptionally stubborn when it comes to training.

The Boxer is a highly sociable dog that even gets along well with other family pets. However, they can be distrusting of strangers. Boxer dogs love their family members, especially children. They will enjoy playing with children, but you need to ensure that you supervise play time to make sure your Boxer doesn’t play to rough with your child, or accidentally knocks a child down.

The Boxer is extremely devoted to his family, and is very protective of them. This makes him an excellent guard dog.

Boxer dogs require plenty of exercise (at least two 20 minute walks daily). Boxers can comfortably live both in the country or the city. However, they are not good apartment dogs. Moreover, you should know that Boxers are known to be destructive if they are left alone for too long. They become bored easily and are prone to separation anxiety. Therefore, you need to be ready to make spending time with your Boxer a substantial part of your daily life.

Boxer dogs are easy to care for as far as grooming is concerned. Boxers shed very little, and all they require is an occasional brushing (weekly or bi-weekly) to keep their coat shiny and healthy.

The average life span of a Boxer is 9 – 11 years. They are prone to certain hereditary health problems and should be tested for hip and cardiac problems.

If you are a first time dog owner, Boxer dogs may not be the best choice. While they will certainly provide you with plenty of affection and companionship, they are a handful, and will demand your constant attention. Therefore, if you are not ready to fully commit yourself to the full time job of raising and caring for a Boxer, consider another breed. 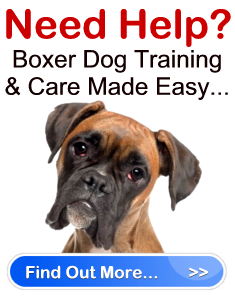